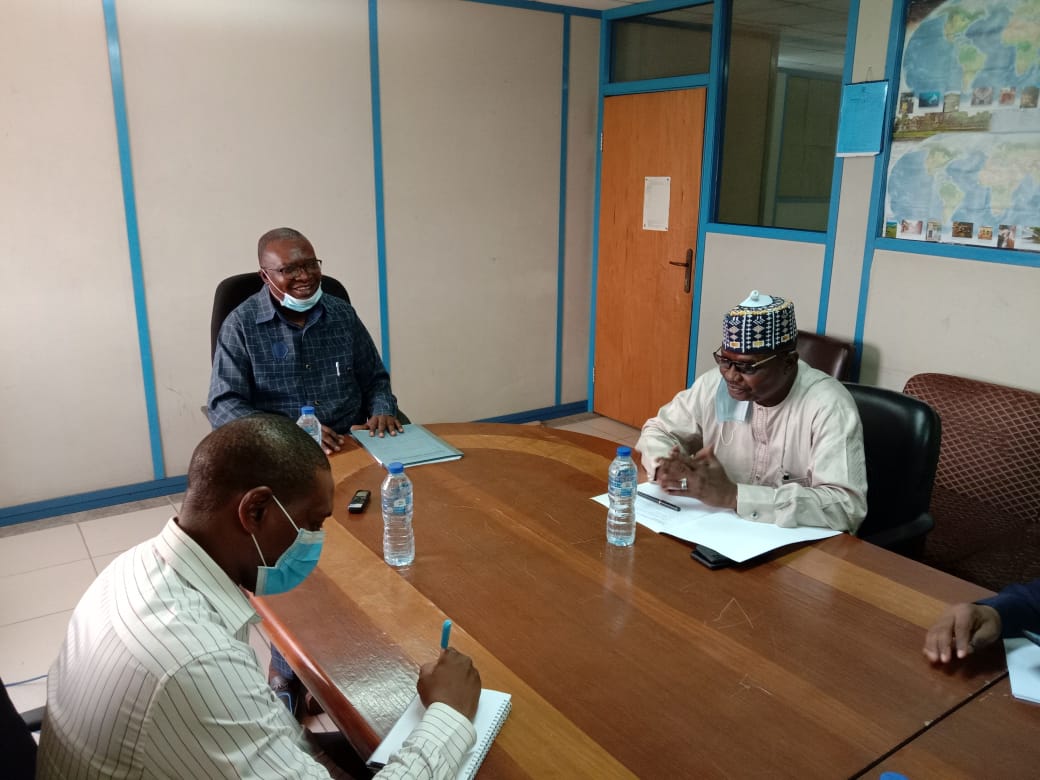 The Executive Secretary, National Institute for Cultural Orientation (NICO), Mallam Ado Muhammed Yahuza has stressed the need to partner with National Commission for United Educational Scientific and Cultural Organization (NATCOM-UNESCO) in order to tap from the wealth of experience and networking that abound in NATCOM-UNESCO to fulfil its mandate.

Mallam Ado Yahuza made this statement when the Institute visited the Secretary General, NATCOM-UNESCO, Mr. Idowu Olagunju in his office, NATCOM-UNESCO Secretariat, Central Business Area, Abuja on Tuesday, April 13, 2021 on a courtesy call to familiarize with him as well as solicit support and partnership from the international cultural body in Nigeria,

His words, “Thank you for the acceptance, I know that we have somebody that is in NATCOM-COM UNESCO to carry along the agencies of government under NATCOM-UNESCO. Your support to NICO has been very robust, we want the experiences, networking not just financing but all the experiences to be able to fulfil NICO’s mandate. I believe we are here to add more value and make impact to our dear nation, Nigeria. We are going to be working not just as partners in progress but brothers in progress. By the grace of God we will work together.’’

The NICO, ES also intimated the Secretary General on the recent UNESCO issuance of certificate of Inscription to Kwa-hir theatre as one of Nigeria’s Cultural festivals inscribed on the UNESCO World Cultural Festivals organized and sponsored by UNESCO. This Mallam Yahuza said was part of NICO’s achievement in the last convention in Paris.

More so, that efforts are in top gear to get Kano Durbar Cultural Festival inscribed in the UNESCO’s World Cultural Festival list in the next convention. The reason for this decision, Ado Yahuza said was the fact that Kano Durbar festival is central in the cultural activities of Northern Nigeria.  He added that the script and video as part of the requirement for the inscription has been completed and submitted to UNESCO in Paris for approval.

The NICO ombudsman, however, thanked NATCOM-UNESCO for its approval of NICO’s programme with that of Information and Digital Economy in its 2021 programme of events.

Welcoming the NICO delegates, the Secretary General, NATCOM-UNESCO, Mr. Idowu Olagunju commended NICO for always responding promptly to the correspondences from NATCOM-UNESCO as against the bureaucracies the commission experience in other agencies of government.

Mr. Olagunju assured that the collaboration will be much better in his dispensation as the Secretary General. He said that as a commission that interface with issues that have to do with UNESCO, NATCOM-UNESCO will ensure that Nigeria benefits as much as possible by ensuring that there would be  no lacuna and where it exists, would ensure that such lacuna would be filled as much as possible.

His words, “In every of your programme, get us involved. My mandate is that, I will not allow Nigeria to miss any opportunity in UNESCO scheme of things by the Grace of God. I promise you that NICO will continue to enjoy robust collaboration in my own time, it will not stop.