KANO DURBAR: A POTENTIAL ELEMENT FOR INCRIPTION ON THE UNESCO WORLD HERITAGE LIST OF INTANGIBLE CULTURAL HERITAGE OF HUMANITY 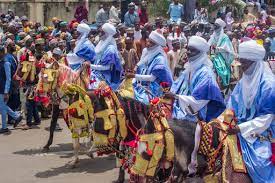 KANO DURBAR: A POTENTIAL ELEMENT FOR INCRIPTION ON THE UNESCO WORLD HERITAGE LIST OF INTANGIBLE CULTURAL HERITAGE OF HUMANITY

The Durbar festival is a dexterous display of horsemanship, traditional concert and bands of drummers and trumpeters; and impressive sight of a royal parade of thousands of men on horse adorned with colourful garments and regalia. It is one of the largest public shows in Nigeria which occurs simultaneously across the Emirates in Northern Nigeria and no doubt one of the most living legacies of modern Nigeria. The Durbar, though rooted in the religious tradition of Muslims, showcases social practices and brilliant exhibition of cultural heritage of the people.

The Durbar was initially conceived as a military parade to assess the military state of readiness and a show of fealty to the Emir. However, the festival has today evolved into a social display of tradition, culture, skill and grandeur, a purely ceremonial event associated with Eids, welcoming of visiting dignitaries and the installation of new Emirs.

The Durbar entertains instructs excites, and dignifies political power structure just as it promotes peaceful coexistence through social interaction. Creative functions such as horse-grooming and costuming including the production of saddles, gold or silver wares to be used for decorating the horses manifest during the festival thereby creating employment while boosting the local economy.Since its introduction in the 15th Century by Sarkin Kano, Mohammed Rumfa, the Durbar festival has spread to almost all the major Emirates in Northern Nigeria. The Emirates known for well-staged Durbar performances include Kano, Zazzau, Argungun, Bauchi, Maiduguri, Bida, Kastina, Sokoto and Kebbi.Kano Durbar is unique, featuring about ten thousand horses and horsemen and has retained many of its initial characteristics. It is reputed to be one of the oldest and the largest decorated horse procession in the World. The Durbar procession in Kano which could last up to four days reveals the wealth of the city as created and sustained by the skills and industry of the people.Kano is home to thousands of craftsmen and women, whose skills such as dyeing leatherworks brass making fabric design and iron smelting have been passed down from generation to generation. This qualities, Kano Durbar as a veritable intangible cultural heritage that needs to be safeguard for possible inscription on the World Heritage Map.In a bid to ensure the representation and inscription of Kano Durbar festival on the World Heritage Map the Department of Research and Documentation, National Institute for Cultural Orientation (NICO) in collaboration with the UNESCO Division of Federal Ministry of Information and Culture, embarked pm a field research on Kano Durbar festival in Kano State, North West Nigeria from 6thto 10th October, 2020.