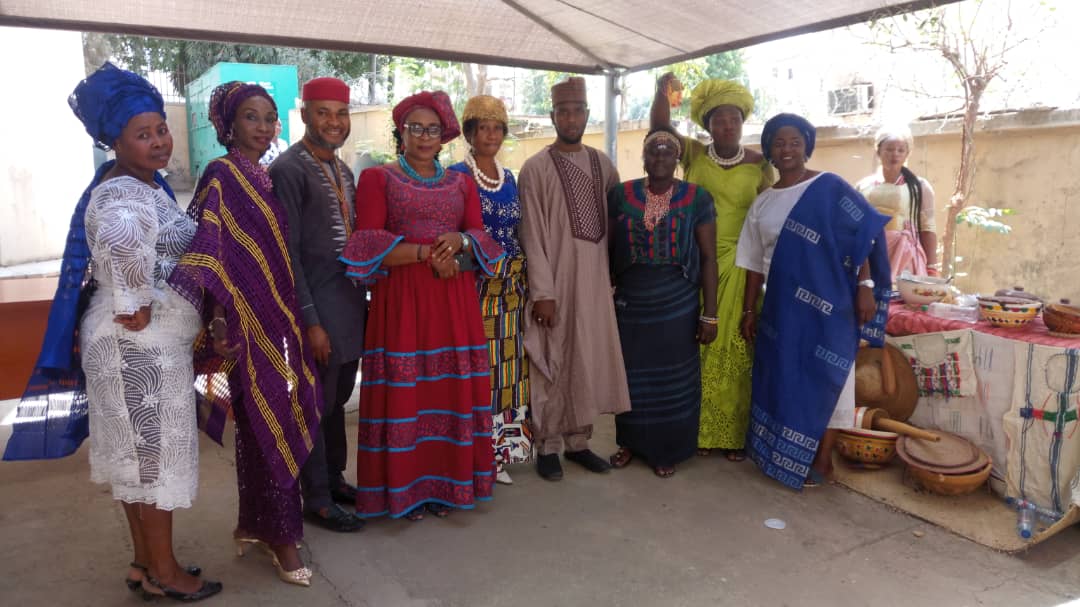 Culture, according to the Cultural Policy for Nigeria 1988, is defined as, the totality of the way of life evolved by a people in their attempts to meet the challenge of living in their environment, which gives order and meaning to their social, political, economic, aesthetic and religious norms and modes of organisation, thus distinguishing a people from their neighbours.

This culture comprises the material, institutional, philosophical and creative
aspects of a people’s way of life. The material aspect has to do with artefacts in its broadest form namely; tools, clothing, food, medicine, utensils, housing, etc; the institutional deals with the political, social, legal and economic structures erected to help achieve material and spiritual objectives; while the philosophical is concerned with ideas, beliefs and values; on the other hand, the creative concerns a people’s literature (oral or written) as well as their visual and performing arts which are normally moulded by, as well as help to mould other aspects of their culture.

The nation’s working cultural document also notes that, culture is not merely a return to a people’s customs of the past, transmitted from their forebears but an embodiment of the
attitude of a people to the future of their traditional values with which they face the demands of modern technology and which is an essential factor of their development and progress.

Therefore, when we talk about culture, we are also talking about national
identity, because culture, is at the core of a people’s national development objectives, as it represents, in its broadest form, the fountain spring of all policies for development, whether physical, educational, social, political  or economic.

The strategies for a people’s national development would thus depend on the
understanding of their culture and the adaptation of its elements for political, educational, physical and economic development, as well as the strengths derived from the culture for social integrationanddevelopment.

Given the fact that culture is a way of life and it has been generally accepted that there are three essentials of life; food, shelter and clothing, we are looking at the material aspect of a people’s culture which include their clothing- dress culture.

The dress culture of a people is a major distinguishing factor of their culture, as it says a lot about the particular people because the materials used for their clothing accessories and mode of dressing such people is peculiar to them. Nigeria, as a multi-cultural nation comprises also of diverse dress culture of the various peoples that make up the nation. The interesting aspect about this is the fact that there is beauty in diversity.

The multiplicity of Nigerian dress culture is an added advantage because, as it is said, ‘there is unity in diversity’, and we do have beauty in our diversity in the area of dress culture, because, as fashion is dynamic in other parts of the world so it is in Nigeria with our diverse dress cultures.

These diverse dress culture in Nigeria, would include, the ‘aso-oke’ fabric, identified mostly with the Yorubas of South-western Nigeria, a dress culture that is in vogue all over Nigeria and has become the order or uniform for wedding occasions, parties, festivals and even burial ceremonies, known with the name, ‘asoebi’.

Another dress culture in vogue in the country is the up and down wrapper style of the Igbos of South-eastern Nigeria, known as ‘ishiagu’ popular with their women. The same wrapper the women use is also used for the tops for their men.

The Hausa/Fulani style dress culture is yet another flourishing aspect of the Nigerian dress culture, the flowing gown called ‘babanriga’ and turban with cap to match for their men, and the women with their Ankara top blouse and wrapper with veil known as ‘hijab’ to match.

Other flourishing dress culture in Nigeria is the black and white stripes fabric known as ‘anger’; and the red and black fabric called ‘apa/edema’ popular with the Tiv’s and Idoma’s of North-central Nigeria respectively.

The ‘Etibo’ dress culture of the Niger-Delta people in South-south Nigeria, comprising wrappers for both men and women and the bola hat and walking stick to match for the menis another thriving indigenous dress culture in Nigeria.

However, the Nigerian dress culture has been faced with challenges, particularly, from the effects of westernization and globalization. Our people sometimes tend to veer from our indigenous cultural mode of dressing, in obvious preference for western style dress culture. The indulgence in the use of western fabrics and materials has relegated our age-long cherished civilization as a subterfuge for imposing other cultures on Nigeria and Africa as a whole.

The emphasis here is therefore on the need for re-orientation and resuscitation of our indigenous and ethnic values which are embedded in our dress culture. Nigerians need to note that our dress culture defines our individual personalities and by extension, our national identity. As citizens we should have our cultural attires displayed not only when occasion demands but on a daily basis.

It is gratifying to note that we have done so well in projecting our ingenuity in the fashion and dress culture of Nigerians, as it has been modelled and redefined to emphasize the creativity of our designers and flexibility of our traditional attires.

Our diverse culture resulting from locally produced fabrics has inspired beautiful designs. The Ankara material is now used for special occasions such as party wears, office wears and for day to day use. The Aso-oke, Akwete, and the likes are used for evening gowns. The embroiders made on men’s flowing gowns are also unique, it is also heart-warming to see the fashion shows organized to show-case Nigerian fabrics and accessories in different variations and styles.

Many countries of the world use their culture to earn foreign exchange. Why shouldn’t Nigeria do same? If we succeed beyond using our indigenous fabrics as national dress but go to the next level of exporting these cultural accessories in commercial quantities, it could turn around our foreign earning capacity. In this era of strong need for diversification of revenue base, the benefit will be enormous. It will reduce the pressure on oil which seems to be the sole source of government earnings. The ripple effect will be noticeable on the trend of youth rural-urban migration where people are faced with other numerous challenges. It will go a long way to generating jobs for the people in the rural areas where raw materials could easily be sourced.

By the time we attract national and international attention to our national dress culture, it will help put us in the lime light like the Indians and their sari wears or the Ghanians with kente materials. Nigerian fabrics can be used beyond clothing and dressing; they can be used in producing furniture for offices, homes and public places as well as for other accessories. A  national and international focus on our dress culture will also help to mould and direct the other aspect of our national life which includes; the philosophical, institutional and creative aspect of our culture. Our dress culture, as one of our tangible culture heritage must therefore be preserved and kept alive if we desire to boost our national pride and identity.