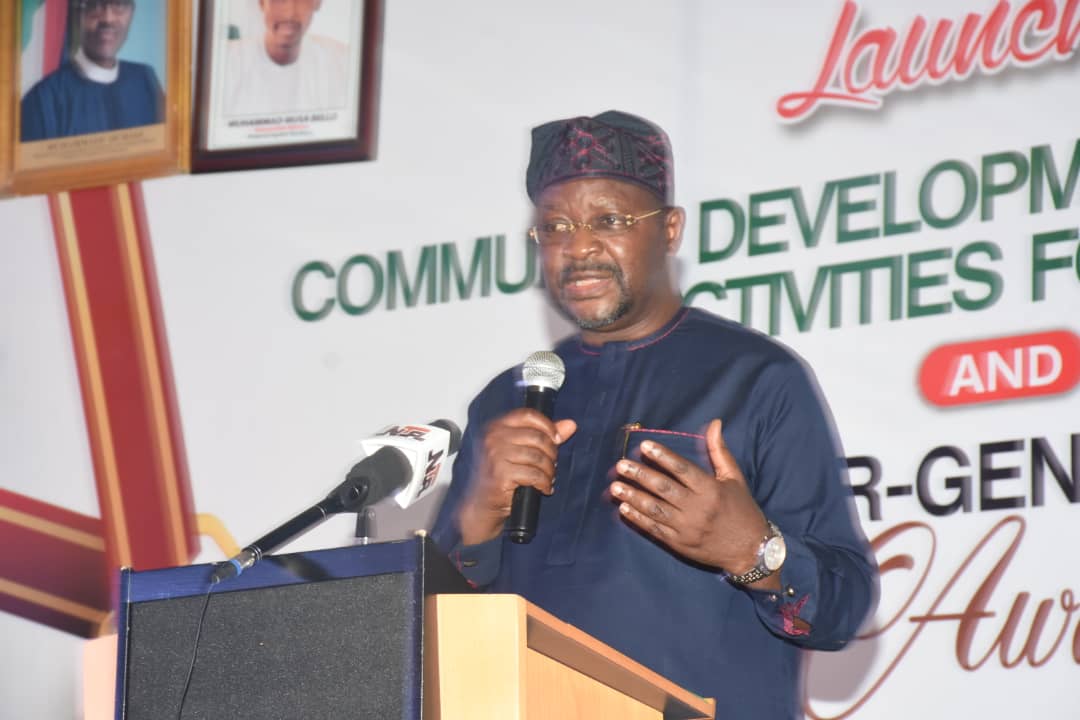 The Honourable Minister for Youth and Sports, Mr. Sunday Dare has called on all serving Youth Corps Members in the country to see Community Development Service (CDS), one of the four (4) cardinal programmes of the National Youth Service Corps (NYSC) as an opportunity to serve their host communities.

Dare who made this call in Abuja at the re-launch of CDS activities for the year 2021and the NYSC Director-General’s CDS Awards, said youth corps members that don’t participate in the CDS have denied themselves the joy of service to humanity.

His words “I want to encourage all corps members across the country to see the CDS as an opportunity to serve our communities. Ultimately when you finish your youth service and you look back, if you have not participated fully in the CDS, you would’ve denied yourself the joy of service. This is because our life is essentially about service, whether we get paid or not. Also the CDS is important because we believe it is going to birth the spirit of volunteerism in this country”.

According to him, the Federal Executive Council (FEC) had about two (2) months ago, approved a policy on volunteerism and his ministry will continue to give the NYSC the needed support to ensure that the CDS component of the Scheme is given serious attention in other to enable it serve its purpose.

He called on Corps members whom he described as the pride of the country and representatives of millions of Nigerian youths, to conduct themselves responsibly in their places of primary assignment, saying that whatever they do during their service year, remains a reflection of the Nigerian youth either negatively or positively.

While pledging President Muhammadu Buhari’s administration’s continued attention to boost the Scheme, the Minister appreciated the innovative minds of corps members, their positive impacts, relevance and resourcefulness towards the national development of our country.

“The NYSC as a scheme harbours the single largest concentration of about 320,000 Nigerian youths. No government ignores such a scheme. Any government that is serious about youth development, about building leaders for tomorrow or building captains of the boardrooms, community leaders, teachers, engineers, mentors will pay absolute attention to a scheme like this”, he said.

On his part, the Director-General of NYSC, Brigadier General S. Ibrahim said the annual launch of CDS activities by the Scheme and institution of awards is re-designed to give additional impetus to the cardinal programme as well as spur both corps members and the CDS field officers to greater performance.

According to him, the CDS is a veritable platform for Corps members to add value to their host communities by identifying community needs and working with the inhabitants to mobilize resources for the execution of planned projects with legacies that do not only endear NYSC to the people, but also help to bridge the imbalance in rural-urban development as well as reawaken stakeholder’s consciousness regarding the needs of the rural dwellers.

Expressing regrets that despite the aforementioned achievements, CDS activities under the scheme have continued to dwindle in recent years due to poor incentives for Corps members who execute projects, lack of support from community leaders, inadequate financial and material resources, the NYSC DG re-stated his determination to address the challenges, hence the decision to re-organize and initiate annual launch of activities.

He further expressed confidence that the new initiative will go a long way in improving, sustaining and making the programme more goal oriented as well as re-invigorate the CDS to bring the conduct of activities in tandem with global best practices.