Children Are Important in Promoting Our Cultural Heritage, Says Yahuza. 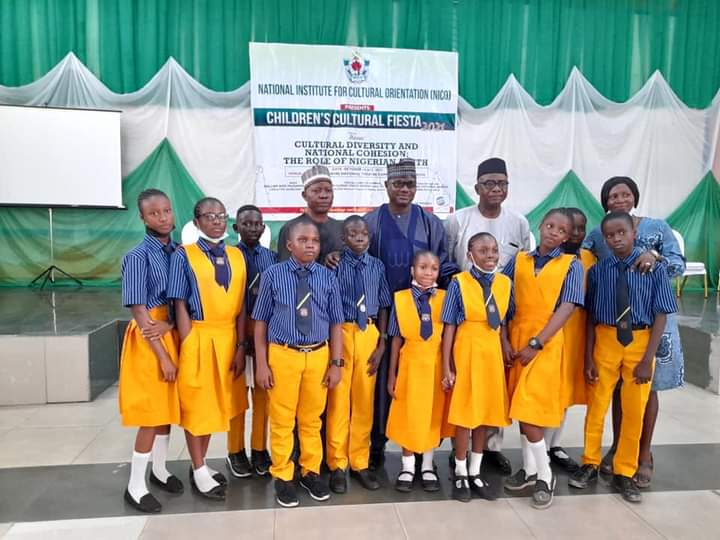 Children Are Important in Promoting Our Cultural Heritage, Says Yahuza.

The Executive Secretary, National Institute for Cultural Orientation (NICO), Ado Muhammed Yahuza has stressed the importance of carrying children along in the promotion of Nigeria’s rich cultural heritage.

Yahuza stated this while delivering a welcome address at the closing ceremony of the Annual Children’s Cultural Fiesta, organized by the Institute on Friday, October 15, 2021 at the Media Centre of News Agency of Nigeria (NAN), Iganmu, Lagos State.

With the event, which had as theme: “Cultural Diversity and National Cohesion: The Role of Youths”, the NICO ES said it is necessary for Nigerians to ensure that our younger ones, who are the leaders of tomorrow are adequately sensitized and educated to appreciate the relationship between peace, unity and national development, stressing that it will go a long way to establish them on a solid foundation that is predicated on our cultural values to enable them function effectively as future leaders.

While disclosing that this year’s Children’s Cultural Fiesta was specially packaged to celebrate Nigeria’s 61st Independence anniversary, with the aim of emphasizing the critical importance of culture in fostering peace, unity and national cohesion, Yahuza said the Institute has over the years, achieved its mandate through diverse cultural orientation, sensitization, public enlightenment and training programmes including seminars, workshops, conferences and culture clubs among others.

He added that the event, which is organized annually, is an offshoot of the Institute’s Culture Club programme in secondary schools, designed to inculcate in the Nigerian child, our cherished cultural values of honesty, hard work, tolerance, patriotism, respect for elders and constituted authority, as well as respect for the sanctity of human life.

“Through the culture clubs, our young people are admonished to take pride in our cherished cultural values, shun examination malpractices, cultism, indecent dressing and drug abuse among others. It is also important to note, that through this platform, NICO has exposed our youths to appreciate the value of cultural diversity and the beauty of other cultures”.

Also speaking Special Guest of Honour at the event, Professor Sunday Ododo, who is the General Manager/CEO, National Theatre of Nigeria, admonished the students to get involved in debates that will sharpen their oratorical skills, pointing that even though it may appear to be difficult at the beginning, with frequent practices, they will be able to eliminate stage fright.

The pioneer Executive Secretary of NICO, Chief Mrs. Victoria Agodo who was Mother of the Day, commended the Management of NICO for sustaining the programme, which she said will help in fostering a better relationship among the younger ones, despite our cultural diversity.