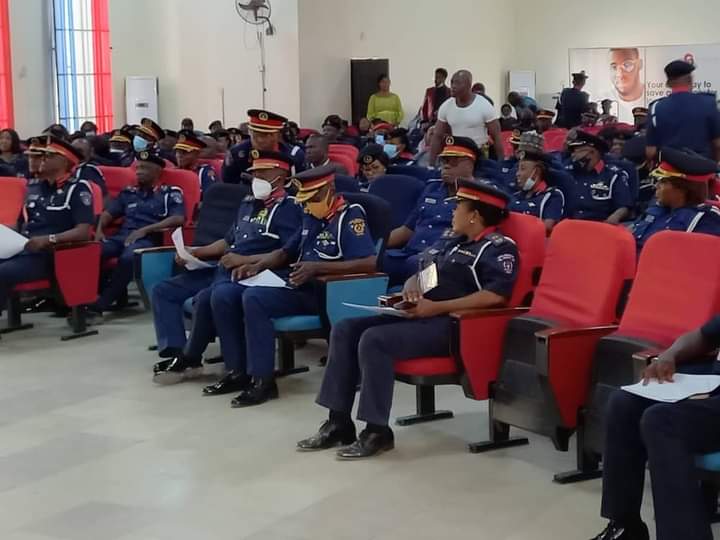 The Commandant General of the Nigeria Security and Civil Defence Corps, Ahmed Abubakar Audi, has called on the Management of the National Institute for Cultural Orientation (NICO) to extend the Nigeria Indigenous Language Programme (NILP) in the Barracks to offices of the Corps across all Local Government Areas in the federation.

Audi made this call while receiving the delegation of the Executive Secretary in his board room at the end of the opening ceremony of the 3rd edition of the programme, held at the Corps Headquarters, Abuja-FCT.

According to him, the language programme is germane, central and actually designed for officers of the Corps and whatever collaboration, support or synergy the Institute may require in actualizing the objective of the programme, he will not hesitate to grant them.

“Our country is a multi-lingual nation and there is need to promote our local languages. It is one thing to be a robust security officer and another thing to be able to speak and understand the local language around you. As security officers, when officers are sent on assignment, what affects some of them is the basic knowledge of understanding the terrain and language the people in that environment speak”.

“This has been given us serious problem as some of our officers will have to go there and start learning how to speak the language and once they are able to speak, they easily adapt with the environment the find themselves”.

In his response, the Executive Secretary of NICO, Ado Muhammed Yahuza said the Institute is willing to extend the programme to all the Commands of the Corps, saying NICO has 13 language training centres for now and more efforts will be made to cover the remaining states.

He expressed the belief that especially now that a lot of officers and men are being deployed to various places where there are security challenges outside their homeland, the training is of outmost importance to officers in view of the need to understand our own culture and languages towards intelligence and information gathering.
While giving the assurance to participants that the programme is well packaged to achieve its objectives with the assemblage of qualified and experienced resource persons, the ES said without understanding our local languages, it will be difficult for officers to effectively discharge their duties.